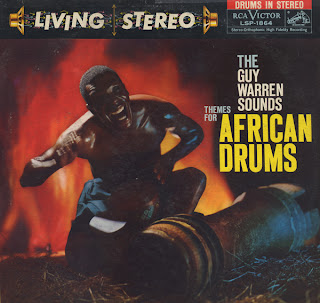 Read about Warren's extensive history on his wikipedia page.

For this album (his second), he wanted blend African influences with voices, drums and a trombone (there are additional instruments used on the LP). He collaborated with the great trombone player Lawrence Brown. Brown told him what he was doing was not common in jazz and that it put him one step ahead.

Some tunes seem straight forward folk, others are a blend of folk and jazz while others such as The Talking Drums Looks Ahead are just cool jazz."

This is awesome stuff.
Posted by By Mark Betcher at 3:25 PM