In The Mood For Love - Bill Lawrence 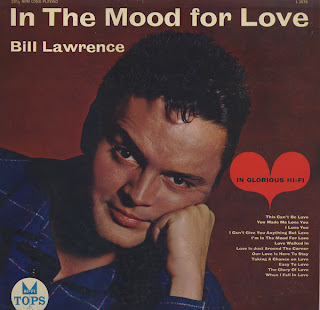 Obscure lounge title from Tops. The album gimmick was to cover songs with the word "love" in the title.

From the back cover: Bill Lawrence, one of the most exciting baritones on the scene today, has been pointing for a singing career ever since he made a lusty contribution to school and church plays. Even before he reached his teens, he was the prize of the local radio station of St. Louis, Mo. and the high spot on many an ameteur hour. Bill's first break came when he won an amateur contest at the Marcel Theatre in Los Angeles where he was ushering.

Lawrence went on to front Jimmy Dorsey's band for seven months and then he won The Arthur Godfrey Show (talent contest) And then became regular guest (1949-50).

This made "...him (Lawrence) one of the most spectacular stars in the world of popular music." And then straight into obscurity. Frankly, this happens to more talented people than you can count.

Lusty contribution to school and church plays? The copy writer wasn't on Bill's side.
Posted by By Mark Betcher at 8:45 PM