Mission: Impossible And Other Spy Music 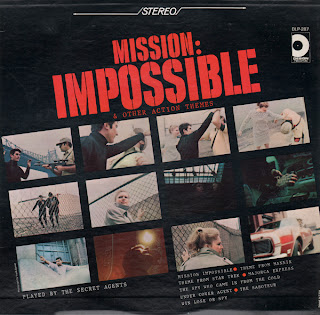 I found this record in the "soundtrack" bin. To the 20 something clerk that priced the album it must have appeared to be a soundtrack from the famous TV Show of the same name. I almost left it in the bin until I noted this wasn't "the" soundtrack, but covers of "spy" music by The Secret Agents. Of course, even today no one knows who The Secret Agents are, apparently the information is still classified.

And why is the Theme From Star Trek mixed in with titles like The Saboteur, The Spy Who Came In From The Cold and Win Or Lose Spy? It doesn't matter, these are all groovy songs preformed by studio musicians who barely had enough time to practice before the recording session. The music is somewhat lackluster... in a good 60s low budget way!
Posted by By Mark Betcher at 8:14 AM