Music For Cards, Conversation And Cuddling 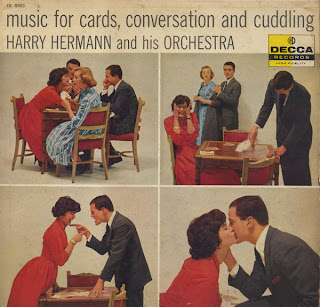 Billboard indicated that this album had "Moderate potential" even though they thought the cover was "attractive".

This is a somewhat obscure Decca release and I could find almost nothing online concerning Harry Hermann.  From the back cover: ...by the fact that at seventeen, he was playing with the Vienna Philharmonic under the direction of Richard Strauss.

I'm not sure exactly what story the cover art is telling. The ever-so-light mood music is way too low key to play during a shouting match.
Posted by By Mark Betcher at 9:18 PM