Other Worlds Other Sounds - Esquivel And His Orchestra 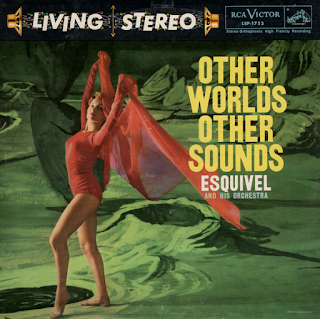 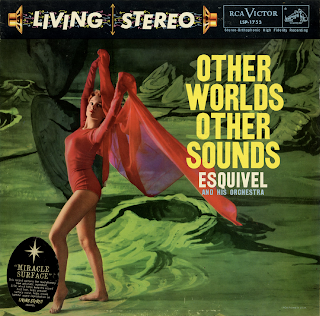 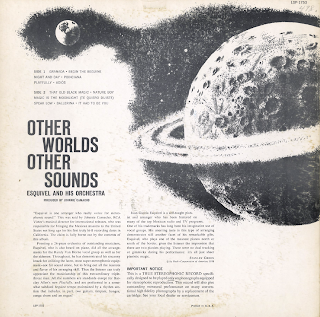 From the back cover: "Esquivel is one arranger why really writes for stereophonic sound!" This was said by Johnnie Camacho, RCA Victor's musical director for international releases who was responsible for bringing the Mexican maestro to the United States not long ago for his first truly hi-fi recording dates in California. The claim is fully borne out by the contents of this album.

Fronting a 26-piece orchestra of outstanding musicians, Esquivel, who is also heard on piano, did all the arrangements for Randy Van Horne vocal group as well as for the sidemen. Throughout, he has demonstrated his uncanny knack for utilizing the latest, most super-stereophonic equipment–not for sound alone, but to bring out all the nuances and flavor of his arranging skill. Thus the listener can truly appreciate the musicianship of this extraordinary triple-threat man. All the numbers are standards except for Barclay Allen's new Playfull, and are performed in a somewhat subdued beguine tempo maintained by a rhythm section that includes, in part, two guitars, timpani, bongos, conga drum and an organ!

Juan Garcia Esquivel is a self-taught pianist and arranger who has been featured on many of the top Mexican radio and TV programs. One of his trademarks has long been his imaginative use of vocal groups. His unerring taste in this type of arranging demonstrates still another facet of his remarkable gifts. Esquivel, who plays one of the meanest pianos north or south of the border, gives the listener the impression that there are two pianists playing. There were no dual tracking or gimmicks during he performance: it's all just sheer pianistic magic. – Stanley Green

From Billboard - November 10, 1958: The original monaural version of the Mexican maestro's sound specialty album was a hi-fi standout. The colorful contrasts of the instrumentation in these Latin-tinged, big-band readings lend themselves to the stereo medium and the engineers made the most of the opportunity. Good listening set provides a good workout for the system.