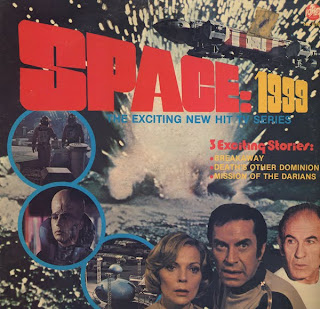 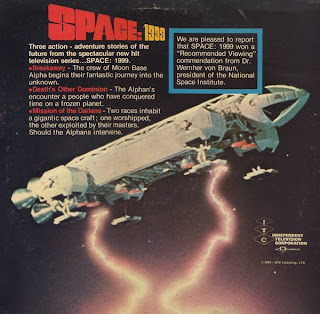 Splashy cover art and stories created for the purpose of capitalizing on the success of the TV series.

The first track on the A side is a tale that uses "magnetic energy" as a foil. Apparently there was a problem with cell phones and refrigerator magnets on the dark side of the moon. This is serious. "Emergency Code Alpha 1"!

Actually, this is the story about The Moon breaking away from The Earth. The crew on The Moon wants to go back to The Earth. But The Earth is pretty much screwed and a second later a new planet on which it is possible to create new waste dumps filled with cell phones and refrigerator magnets is discovered!
Posted by By Mark Betcher at 6:26 AM