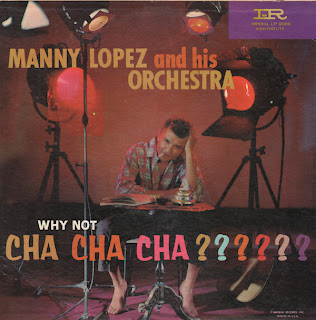 From the back cover: One of his greatest fans, Tony Martin, has often lamented that he has not had an opportunity to do a Latin American album with Lopez. "This man Lopez," says Martin, "is to the Cha Cha Cha what Ted Williams, Mickey Mantle and Willie Mays are to baseball.

Manny is happily married (a sad note, perhaps, for many of his female admires) has four children, all of whom play musical instruments. He is often referred to as "The Don Juan of the Baton," as much for his sparkling wardrobe as his vitality and good looks. Someone once asked Lopez if it was true that he owned forty-five suits? "That's true," he flipped, "but don't forget the twelve suits that are still at the cleaners."