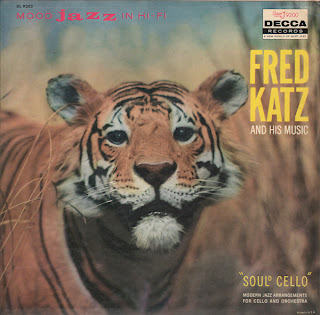 This album appears to have been recently released on CD (with several other artists), but is none-the-less hard to find. Even, though the rights status seems vague, I will not be posting a sample. Sorry!

I'm blogging this album even without a sample track because it is so fine! The music is a smart blend of jazz and easy from the late 50s. The sound is hard to compare to anything that was going on at the time. It's dramatic, bright and has a bit of a "soundtrack" edge to it. It plays through almost like a concept album to my ears.

The 'Far Out' Music of Fred Katz

Country Gardens
Satori
Andante
Circus
Wayfaring Stranger
Time After Time
The Vidiot
Lament Of The Oracles
I'm Glad There Is You
The Toy The Never Was
Intermezzo
Come With Me
Posted by By Mark Betcher at 7:52 PM