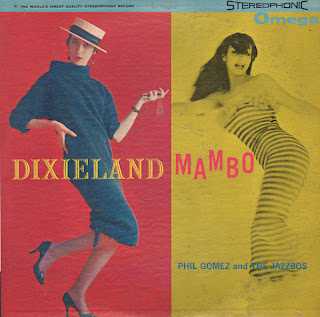 From the back cover: Phil Gomez went to Europe in the fall of 1956 with Kid Ory, where the band played concerts in every major city on the continent, and while in Europe they worked on a French movie and did an album in Paris. The most recent movie he has appeared in is The Benny Goodman Story, and Phil has gathered fans from his recent Television work on the Bob Hope Show and Stars Of Jazz. At present he is signed with Jerry Colonna accompanying him on tours and personal appearances.

This is one of the interest cover of Quiet Village. Quirky album from the cover art to the Dixieland/Latin blend.