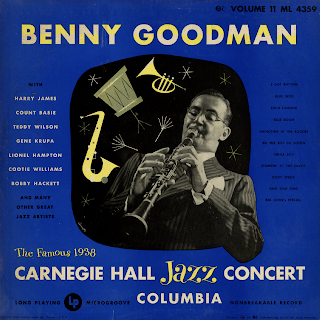 Sing Sing Sing
Benny Goodman Carnegie Hall Jazz Concert
Volume II
Columbia ML 4359
Personnel:
Clarinet: Benny Goodman
Alto Sax: Hymie Scherzte & George Koenig
Tenor Sax: Babe Russin, Arthur Rollini & Buck Clayton
Trumpet: Harry James, Ziggy Elman, Cootie Williams & Gordon Griffin
Trombone: Vernon Brown & Red Ballard
Drums: Gene Krupa
Guitar: Allan Reuss & Freddy Green
Piano: Jess Stacy, Count Basie, Teddy Wilson
Bass: Harry Goodman & Walter Page
Vibraphone: Lionel Hampton
Cornet: Bobby Hacket
Soprano and Alto Sax: Johnny Hodges
Baritone Sax: Harry Carney
Vocal & Trumpet: Martha Tilton
From the back cover: The first intimation I had that there might be such a thing as a concert by Benny Goodman's band in Carnegie Hall came one December afternoon in  1937. I was on a journalistic mission to Gerald Goode, press chief for S. Hurok, when he excused himself to answer the phone. After absorbing the information form the other end, he closed off the mouthpiece and said: "What would he think of a concert by Benny Goodman's band in Carnegie?"
One fact was firmly settled at the outset. The concert would consist of the Goodman band and allied talent only. There would be no special "compositions" for the occasion. The musicians in this kind of music, were the thing, and so it would remain. The regular book built by Fletcher Henderson, Joe Mundy, Edgar Simpson, etc., which had built Goodman's reputation – or vice versa – would suffice. For a little freshness, Henderson was asked to do a couple of standard tunes (Dick Rodgers' Blue Room come in time to be used) and Edgar Sampson – whose Stompin' At The Savoy was a by-word with Goodman fans  – was asked to bring around a few things.
The idea for the historical "Twenty Years Of Jazz" was I am afraid, mine. I apologize for it because it probably caused more trouble in listening to old records and copying off arrangements than it was worth. However, it brought out that family of feeling that all good jazz musicians have for their celebrated predecessors, permitting a backward look at such landmarks of the popular  music field as the Original Dixieland Band, Bix Beiderbecke, Ted Lewis, Louis Armstrong and the perennial Duke Ellington.
With these elements of the program defined, the rest was easy. The trio would have a spot, and then the quartet with Hampton. Nothing could follow this but intermission, and it did. (Goodman as asked the day before: "How long an intermission do you want?" "I dunno," he replied, "How much does Toscanini have?") In the second half, there would be arrangements of tunes by Berlin and Rodgers, some of the recorded specialties of the band – Swingtime In The Rockies, Loch Lomond and a current hit, Bei Mir Best Du Schon, leading to an inescapable conclusion with Sing Sing Sing which had become, by this time, a tradition, a ritual, even an act. I don't suppose that Louis Prima, who wrote the tune, was around Carnegie Hall that night. It is not often that Back or Beethoven are rewarded, in Carnegie Hall, with the hush that settled on the crowded auditorium as Jess Stacy plowed a furrow – wide, deep and distinctive – through five choruses of it.
Well, that was all yesterday. A chilly, January yesterday, which somehow seems warm and inviting because twelve years have passed, along with a war and some shattering upheavals in the world. But it wasn't warm outside Carnegie Hall that night as a picture in a contemporary paper, showing an overcoat, begloved line of prospective standees, attests. Inside, the hall vibrated. Seats had been gone for days, of course, but one of those last minute rushes had set in, when all New York had decided that this was the place it wanted to be on the night of this particular January 16. The boxes were full of important squatters, and a jury-box had been erected on stage to care for the overflow. Tension tightened as the orchestra filed in, and it snapped with applause as Goodman, in tails, strode in, clarinet in hand, bowed, and counted off Don't Be That Way.
Next day, contemplating the diverse reviews, the interested editorial opinions in the Times and Herald-Tribune, someone said to Goodman, "It's too damned bad somebody didn't make a record of this whole thing." He smiled and said: "Somebody did." Incredulously, I heard those "takes" (relayed to the CBS Studios from a single overhead mike from Carnegie Hall) and relived the experience detailed above. Thereafter, one set was destined for the Library of Congress, the other – who knows? Twelves years passed, and the whole thing was but a memory, when the other set turned up in a closet of the Goodman home a few months ago. Daughter Rachel came upon it and asked: "Daddy, what's this?" Daddy took a look, and wisely decided to have it transferred to tape before listening again. So has been preserved, in a representative way, one of the authentic documents in American musical history, a verbatim report in the accents of those who where present, on "The Night of January 16, 1938." – Irving Kolodin
Quartet: I Got Rhythm
Blue Skies
Loch Lomond
Blue Room
Swingtim In The Rockies
Bei Mir Bist Du Schon
Trio: China Bay
Quartet: Stomping' At The Savoy
Quartet: Dizzy Spells
Sing Sing Sing
Encore: Big John's Special
Posted by By Mark Betcher at 5:54 PM