Mann In The Morning - Herbie Mann 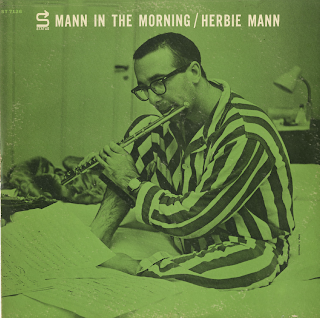 Nature Boy
Mann In The Morning
Herbie Mann - Flute & Tenor Sax
Recording by Van Gelder
Photo: Bengt H. Malmquist
Status 7136
1958
From the back cover: The flow of American jazzmen overseas, in the past ten years, has not been an overwhelming tide but there have been enough Yankee visitors to European shores, excepting England, to give many continentals a first hand listen to some of America's most prominent jazzmen.
Sweden, the first foreign country to take to modern jazz wholeheartedly (both its listeners and musicians), has been the scene of numerous visits during the 1947-1957 period. Chubby Jackson's sextet started the invasion in 1947, followed by the Dizzy Gillespie orchestra. In the early Fifties, several package shows, Benny Goodman's small group and individuals like Stan Getz played there. In the summer of 1956, Rolf Ericson, the Swedish trumpeter who worked in the United States for a few years, headed two different sets of American musicians on tours of Sweden and the Jay Jay Johnson quintet, Tony Scott and Herbie Mann all made separate appearances in 1957.
It may be remembered that Prestige was the label which first brought the best of the Swedish jazzmen to the American public. Lars Gullin, Bengt Halberg, Ake Persson, Arne Domnerus, Reinhold Svensson, Putte Wickman and Gosta Theselus were will represented in the Prestige 100 series issued on 10-inch LPs. These records are now out of print and have fallen into the collector's dust-bin realm. In re-issuing items from the 10-inch catalog in 12-inch form, the only Swedish jazzmen that appear are in the Clifford Brown Memorial (7055). There, Gullin, Halberg, Persson and Domnerus are heard in the memorable session that they made with Brown and Art Farmer when the two trumpeters visited Stockholm as members of Lionel Hampton' band in 1953.
Although Tommy Flanagan Trio Overseas (7134) was recorded in Stockholm during the Jay Jay Johnson group's stay in 1957, no Sweden musicians are included. Since Herbie Mann went to Sweden as a soloist, it follows that any recording he did was in the company of the local jazzmen. That he was happy not only with Sweden but also its musicians was strongly verbalized by Herb upon his return to the States. He told of the favorable general atmosphere, created by friendliness, warmth and respect, that a jazz musician enters. He had words of praise for the playing of Hallberg, Persson and baritonist Lennart Johnson. The latter two are heard with him in this album. - Ira Gitler
From Billboard - June 9, 1958: Mann is featured on flute and tenor sax with three European groups in this set. It's a nicely balanced set with a fair share of ballads and swingers. Mann has several fairly recent packages on the market, and unknown names that support him in this outing may prove a sales handicap. Artistically, this is among his best efforts. Tunes include "Nature Boy," "Polka Dots and Moonbeams" and "Ow!"
Cherry Point
Hurry Burry
Sarenada
Adam's Theme
Early Morning Blues
Nature Boy
Ow!
Polka Dots And Moonbeams
I Can't Believe That You're In Love With Me
Song For Ruth