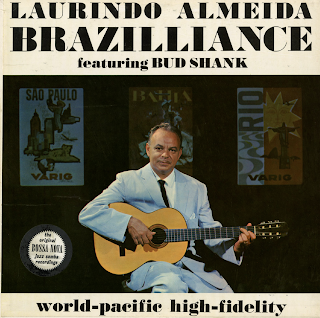 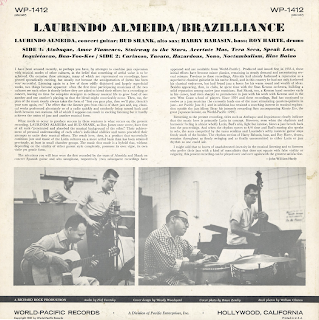 Acertate Mas
Brazilliance
Laurindo Almeida
A Richard Bock Production
Audio by Phil Turetsky
Cover Design: Woody Woodward
Cover Photo: Bruce Zemby
Back Cover Photos: Williams Claxton
World-Pacific Records WP-1412
A Division of Pacific Enterprises, Inc.
1961
From the back cover: The selections you will hear were the first recorded by the team of Almeida and Shank on concert Spanish guitar and alto saxophone, respectively (two subsequent recordings have appeared and are available from World-Pacific). Produced and issued first in 1953-4, these initial efforts have become minor classics, remaining in steady demand and necessitating several reissues. Previous to these recordings, Almeida had already fashioned a reputation as a superlative classical guitarist in his native Brazil,  and in this country he had not only furthered his classical endeavors, but had found jazz a home for his warm sound and wealth of ideas. Besides appearing, then, in clubs, he spent time with Stan Kenton orchestra, building a solid reputation among native jazz musicians. Bud Shank, too a Kenton band member early in his career, had risen sharply to prominence in jazz with his work with Kenton and in the new West Coast school of players. Since 1954 and these recordings, bud has continued to evolve as a jazz musician (he currently leads one of the most stimulating quartets-quintets in jazz – see Pacific Jazz 21) and in addition has retained a searching interest in musical exploration outside of jazz idiom (hear his intensely rewarding flute accompanying Kimio Eto, the great Japanese kotoist, on World-Pacific 1299).
From Billboard - November 6, 1963: These recordings were originally released a few years ago, and constant demand has necessitated this new album. They show off Laurindo Almeida accompanied by Bud Shank on alto, along with Harry Barbasin on bass and Roy Harte on drums. It combines Latin rhythms and jazz neatly, and should continue to be a steady selling set.