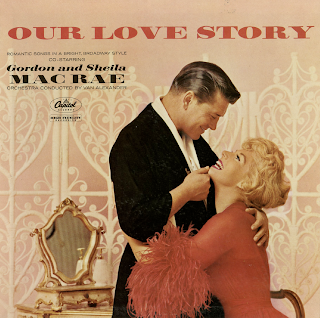 I'm Glad There Is You
Our Love Story
Romantic Songs In A Bright Broadway Style
Co-Starring
Gordon and Sheila MacRae
Arranged & Conducted by Van Alexander
Produced by Voyle Gilmore
Capitol Records T1353
1960
From the back cover: This is the MacRae's first album together, and it captures the same charm and sparkle and carefree quality that make them one of the most sought after acts in night clubs and on television. Their choice of material here also serves to demonstrate that Gordon and Sheila know their way around the musical comedy stage.
Gordon's work, of course, is so well known that very little else can be said except that the quality of his rich, flexible baritone deepens with each new album; his interpretations are surer, more subtle, and more varied than ever.
Hearing Sheila for the first time on records, listeners will be pleased to discover a rare versatility combined with plenty of humor, as well as pleasing forthright diction. Furthermore, she is able to deliver a ditty like "My Baby Just Cares For Me" with a nice torch feeling that leaves no doubt as to why Baby should feel this way.

From Billboard - April 18, 1960: The real-life husband and wife team joined forces on wax for the first time with a varied line-up of items. MacRae warbles in his usual rich legit fashion on some great standards. His frau contributes a couple of her nitery mimic routines, plus a sock edition of "My Baby Just Cares For Me," and they duet pleasantly on a few sides, including the title tune, also released as a single. Solid jockey wax.

Our Love Story
I Met A Girl
A Wonderful Guy
Love Is A Simple Thing
I'm Glad There Is You
That's For Me
Love And Marriage
All The Things You Are
My Baby Just Cares For Me
When The Children Are Asleep
And This Is My Beloved
Happy Anniversary
Posted by By Mark Betcher at 9:15 PM