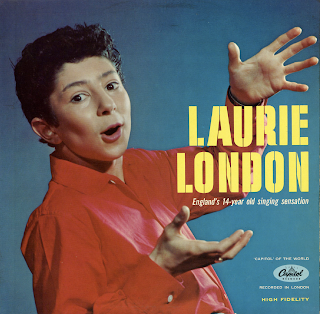 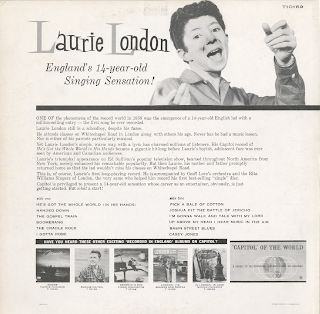 From the back cover: One of the phenomena of the record world in 1958 was the emergence of a 14-year-old English lad with a million-selling entry – the first song he ever recorded.

Laurie London still is a schoolboy, despite his fame.

He attends classes on Whitechapel Road in London along with others his age. Never has he had a music lesson. Nor is either of his parents particularly musical.

Yet Laurie London's simple, warm way with a lyric has charmed millions of listeners. His Capitol record of He's Got The Whole World In His Hands became a gigantic hit long before Laurie's boyish, adolescent face was ever seen b y American and Canadian audiences.

Laurie's triumphal appearances on Ed Sullivan's popular television show, beamed throughout North America from New York, merely enhanced his remarkable popularity. But then Laurie, his mother and father promptly returned home so that the lad wouldn't miss his classes on Whitechapel Road.

This is, of course, Laurie's first long-playing record. He is accompanied by Geoff Love's orchestra and the Rita Williams Singers of London, the very same who helped him record his first best-selling "single" disc.

Capitol is privileged to present a 14-year-old sensation whose career as an entertainer, obviously, is just getting started. But what a start!

He's Got The Whole World (In His Hands)
Handed Down
The Gospel Train
Boomerang
The Cradle Rock
I Gotta Robe
Pick A Bale Of Cotton
Joshua Fit The Battle Of Jericho
I'm Gonna Walk And Talk With My Lord
Up Above My Head I Hear Music In The Air
Basin Street Blues
Casey Jones
Posted by By Mark Betcher at 7:30 PM