Enoch Light and the Glitter Guitars 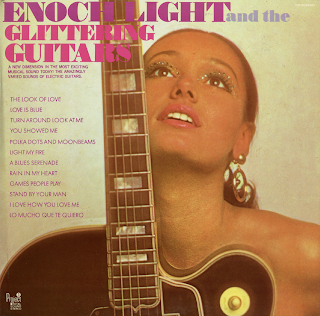 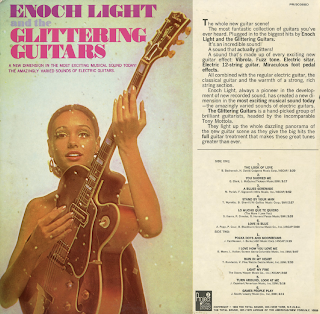 From the back cover: A sound that's made up of every exciting new guitar effect: Vibrola, Fuzz tone, Electric sitar, Electric 12 string, Miraculous foot pedal effects.

From the inside (gatefold) cover: To show the full potential of this unusual grouping of guitars, Enoch Light called together some of the finest guitarists playing today – guitarists who are not only legends among other musicians but whose musically fame has spread to the general public – Tony Mottola (Associate Producers), Al Casamenti, Jay Berliner, Bucky Pizzarelli and the inventive Vinnie Bell.

As a harmonic pad for this guitar ensemble, there is a 14-piece string section with George Ockner as concertmaster. For contrast, the sound of the flute or piccolo, play by Phil Bodner, has been added. And for rhythmic foundation there are an organ or electric harpisichord, a Fender bass, a percussionist and a drummer.

Arrangements for this unusual group have been written by Dick Lieb, a remarkably imaginative orchestrator who writes for the "Tonight Show" orchestra and for Radio City Music Hall.

The Look Of Love
You Showed Me
A Blues Serenade
Stand By Your Man
Lo Mucho Que Te Quiero
Love Is Blue
Polka Dots And Moonbeams
I Love How You Love Me
Rain In My Heart
Light My Fire
Turn Around, Look At Me
Games People Play
Posted by By Mark Betcher at 4:38 AM