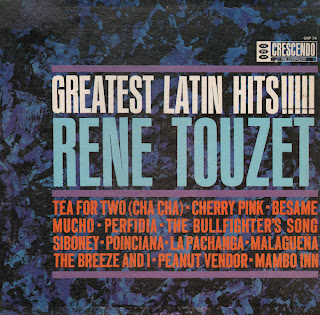 These tracks may be found online as part of the GNP catalog. So I won't be posting a sample.

From the back cover: Rene Touzet was born in Havana and was a child prodigy. He studied with the outstanding music teachers; won first prize in piano at the Falcon Conservatory; and in 1953, the Gold Medal as Cuba's outstanding composer.

Touzet first led his own 16 piece band at the Hotel National in Havana. In 1946, he came to the States to join Enric Madriguera. Shortly thereafter, he formed his own ban and has since been featured at the Crescendo and Ciro's in Hollywood and many of the elite supper clubs in New York and Miami.