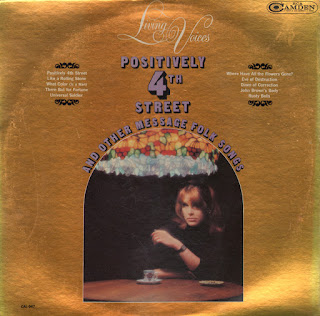 This is one crazy album...

From the back cover: The message folk songs that have become so important in popular music in recent months have been heralded for their timeliness. But everything in this album is not that simple, not that easily categorized – not when one really listens to the extraordinarily meaningful lyrics that are virtually always the thing.

Especially are things not so simple when one listens to the words written by Bob Dylan, the young front-runner of the message and/or protest folk song, folk rock, folk 'n' roll, anti-protest song, what-have-you. True, his words are as timely as today's headlines, but, paradoxically, they are also timeless, frequently dealing with social-political ills we can exchange for those headlines but which also could be set down in many a generation and be topical.

Positively 4th Street
Universal Soldier
Where Have All The Flowers Gone
Like A Rolling Stone
Eve Of Destruction
John Brown's Body
Rusty Bells
What Color
Dawn Of Correction
There But For Fortune
Posted by By Mark Betcher at 3:45 PM