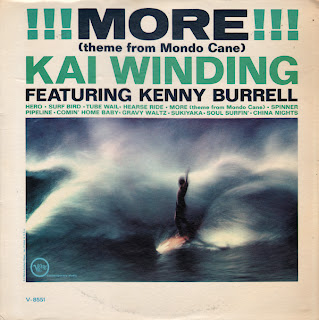 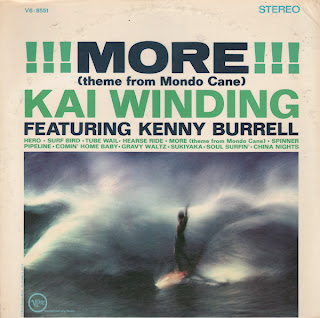 From the jacket notes: This album is the big one for all you surfers out there... on the dance floor or in a hearse or knee deep in an ocean.

An excerpt from August 3, 1963 Billboard: Of course there's not a reason in the world why a top jazz name (Winding) can't come up with a record that makes it in pop, except that it's still the exception rather than the rule. And the only reason it has been an exception, many feel, is that jazz artists have not tried to latch on the latest tune, or show tune, or pop tune, to be issued as a single record. If they did it could be that there would be a lot more than one or two singles records hits on the charts by jazzmen at any one time.

The album is a terrific blend of jazz, 60s light pop and "surf". Good stuff and apparently available only on vinyl.

It is also interesting to note the album was produced by Creed Taylor who made two inventive "concept" albums in the late 50s, Shock and Panic Son of Shock.
Posted by By Mark Betcher at 5:26 AM