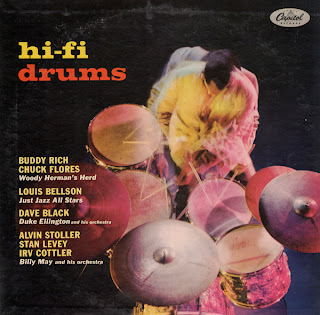 I assume that Capitol collected together the various tracks from a variety of sources to produce the album. The Billy May track above also appeared on a later Capitol album titled Wild Stereo Drums.

Regardless of how the album was produced, all the mix sounds Big Band good.
Posted by By Mark Betcher at 4:14 AM