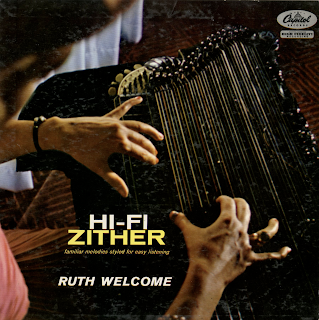 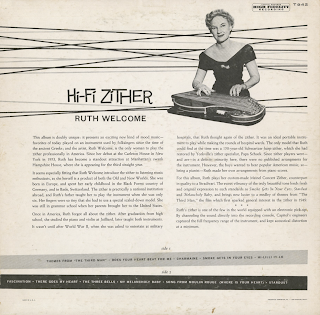 When will the Zither make a comeback in pop music?

This is Welcome's first of 14 albums. The music while pleasant, is a bit reserved when compared to Zither Magic! which was released a few years later. That album is an outstanding and a more "conceptual" project.


From the back cover: It wasn't until after World War II, when she was asked to entertain at military hospitals, that Ruth thought again of the Zither. It was a ideal portable instrument to play while making the rounds of hospital wards. The only model that Ruth could find at the time was a 150-year old Schwartzer harp-zither, which she had restored by Yorkville's zither specialist, Pap Schuck. Since zither players were – and are – in a definite minority here, there were no published arrangements for the instruments. However, the boys wanted to hear popular American music, so being a pianist – Ruth made her own arrangements from piano scores.

Capitol also noted on the back cover that Ruth's Zither was equipped with a pick-up that the engineers were able to plug directly into their console which helped capture the full frequency range and minimized distortion.

Themes From "The Third Man"
Does Your Heart Beat For Me
Charmaine
Smoke Gets In Your Eyes
Hi-Lilli Hi-Lo
Fascination
There Goes My Heart
The Three Bells
My Melancholy Baby
Song From Moulin Rouge (Where Is Your Heart)
Stardust
Posted by By Mark Betcher at 4:14 PM