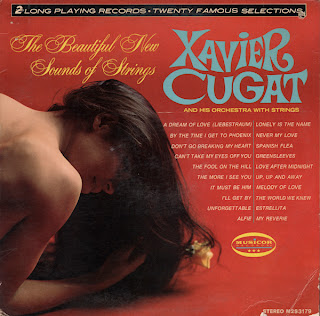 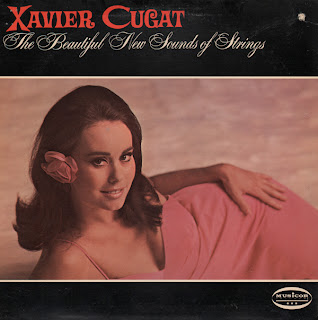 I love Cugat's stuff. I've got a number of Cugat albums collected up here in The Atomic Attic. When I spied this two record set, the packaging looked odd in that the cover is flimsy, cheap and I also wondered how Cugat would work in strings. At first I considered that this package was some type of "covers" set. I had to search around the web just to convince myself that this is actual Cugat recording.

I found proof and was convinced.  Somewhat near the end of Cugat's recording career, he produced this set, a pure easy listening album that sounds NOTHING like his earlier music.

There are a few groovy mood tracks to be found on this record.

I also noted that budget minded Musicor used an image of the model shoot above on the cover of a Hugo Winterhalter 2 record set.
Posted by By Mark Betcher at 4:38 PM