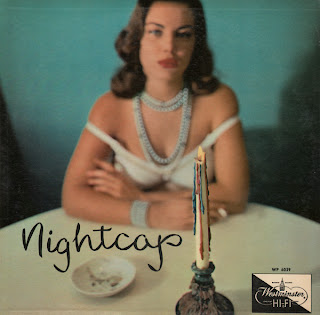 I didn't expect to find this album online for purchase/download... but there it is.

For some reason, you don't get the fabulous original cover with the download.

I also found it curious that Westminster released a pop album as the label is best known for classical music releases.

There are references to Dick Leibert online, but for the most part he seems to be somewhat obscure.

From the back cover: Dick Leibert was born in Bethlehem, Pennsylvania, and educated at the Moravian Prep School and the Peabody Conservatory in Baltimore. He began to play organ professionally at fourteen years of age, when he got a job as theater organist for Loew's in Washington, D.C. Later he toured the Lowe's theater circuit, and then played for two years at the Brooklyn Paramount. Against stiff competition he won the auditions for the permanent post at Radio City Music Hall at the time of the theater's opening, and his performance there made him America's most popular organist. He now devotes much of his time to TV, radio and concert appearances.

Leibert covers a number of my favorite tunes, including Laura and September Song. However, aside from the terrific cover art, I have to recommend Korla Pandit to friends of The Atomic Attic who are looking for fab Space Age organ fare.
Posted by By Mark Betcher at 7:19 PM