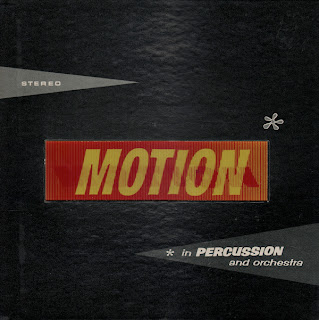 This is a curious album that was produced by D. L. Miller. Miller of Somerset Records, his budget label that produced some good product, including 101 Strings projects (there are some great 101s out there).

Miller seems to have distanced himself from the "budget" side of his business for this project. It might appear that he wanted to try his hand at producing a slick and trendy album. This package was obviously influenced by Enoch Light's Command label. The jacket is a book-fold construction and more, the red panel on the cover, featuring the word "MOTION", is die cut into the jacket. The insert is a piece of plastic that "blinks" when you turn the jacket one way and then the other.  The color changes from red to yellow and the word motion repeats, but changes in size. This was an EXPENSIVE jacket to produce. Design credit goes to W. Dressler.

The engineering is very good on this record (recorded at United Recording Studios, Hollywood, CA). The quality is close to what I hear coming from Command or Mercury during this period.

The content of this album is as good as many of the fun, light pop records coming from Command at the time and Miller is right on top of the trend, borrowing ping pong and percussion stylings from Light. Voodoo Moon is probably one of the cooler tunes off the album. There is also a cool cover of Caravan on the album as well as a dramatic cover of Ski Run from the movie Spellbound.