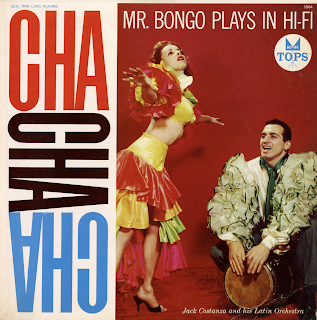 This is an outstanding Latin set.

From the back cover: Costanzo's professional laurels include many "firsts". The handsome thirtyish Chicagoan was the first bongo drummer to work with a name jazz orchestra, joining the exciting Stan Kenton organization in 1947 and working with Stan for two years. His outstanding performance on the Kenton recordings of "Peanut Vendor," "Journey to Brazil" and "Bongo Riff" made the American public aware for the first time of the "little drums with the big sound".

Jack gained further fame when he augmented the Nat "King" Cole trio from February 1949 to September 1953, establishing him as the first bongoist to play with such a trio. His recordings with the velvet-voiced Cole include "Calypso Blues," "Lush Life" and "Strange," numbers which became standard repertoire in their tours in Europe, Hawaii and Stateside.

Since 1954, Constanzo has been an integral part of the acts of Peggy Lee and frantic Frances Faye, with whom he recorded and appeared at lavish spots such as Hollywood's Ciro's, Las Vegas's Sands Hotel and the Fairmont in San Francisco. Moreover, and just for the record, this young man with the heap big beat has appeared in the top concert emporiums on both coasts – Carnegie Hall (with Kenton) and the Hollywood Bowl (with La Lee).

No less extensive in Mr. Bongo's record in motion pictures and television. Lucky man, he's even worked with Marilyn Monroe "No Business Like Show Business" and Grace Kelly "To Catch A Thief". There's no percentage in trying to count a top video show with music where Jack hasn't either sparked the studio orchestra or appeared on camera.

A brief rundown of his other musical credits reads like a roster of Who's Who in Showbusiness:

Also well known as a bongo and conga instructor, the virtuoso numbers among his past pupils some of Filmland's very brightest stars.

Costanzo's latest coup is a pact with 20th Century Fox for a musical role in the picture, "Bernadine". He has recorded sound track for many famous films, latest b being "The Story Of Mankind" and Jerry Lewis' first movie as a single. "The Delicate Delinquent."

Ohio born vocalist Marda Saxon is one of the very few non-Latins to perform successfully the authentic Cuban songs in this album. Originally a dancer with the famous Afro-Cuban Sans Souci Troupe, Marda has been with the Costanzo Orchestra since its organization in April 1956. She joined the band at its first location. Ben Pollack's renowned restaurant on Hollywood's Sunset Strip, and has made personal appearances and recordings with Mr. Bongo since that time.

The rich vocalizings of Kaskara have been entertaining American fans of Cuban music since 1945 when he first came to the U.S. Born in Holbuin, Oriente, Cuba Kaskara had worked primarily with the bands of Perez Prado and Rene Touzet prior to his present association with the Costanzo Orchestra. He previously recorded with Touzer and is here featured in the vocals of Jarochita; Que Dichoso Es; Nana Secre; Jack, Jack, Jack, Quiete; Rabo E Mula. Jack Costanzo appears through the courtesy of Zephyr Records.