The Exotic Sounds of the Japanese Bamboo Flute 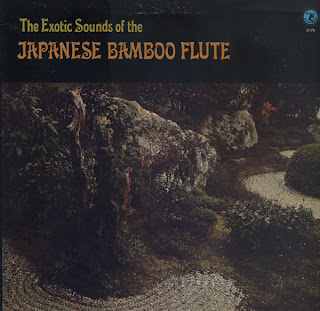 The Exotic Sounds of the Japanese Bamboo Flute
Olympic Records 6170

From the back cover: Watazumido-Shuso is the head of a sect which he himself established, not fully satisfied with the existing three Zen sects of Buddhism.

Through the Japanese flute, Watazumido-Shuso has attained musical and spiritual heights unachieved by anyone else. He is also expert with many other musical instruments and is well known to avant-garde musicians overseas through his records. He serves as advisor to many temples.

Instead of using the traditional Japanese 'shakuhachi' flute, Watazumido-Shuso performs his extraordinary music on 'Hotchiku,' flutes made from untreated bamboo of the ordinary type.

Through use of 'Hotchiku' flute, the true feeling of the Watazumido sect of Zen can be understood, according to Watazumido-Shuso.

The "Hotchiku" flutes range in size from 25 cm to 103 cm and have anywhere from five to twelve holes. Practically all are held and blown vertically like the clarinet, but there is one type blown like the flute.

As pointed out in the explanations of the various tunes, Watazumido-Shuso improvises often because the music is the expression of his feelings.

There are very few albums that feature a single instrument that can hold my interest. This isn't one of them. Even though the bamboo flute is an expressive instrument, the range of expression seems too limited to carry an entire album. Any one track is an interesting experience... but after a while I was hoping for a small jazz combo to jump in and perk things up.
Posted by By Mark Betcher at 11:06 PM