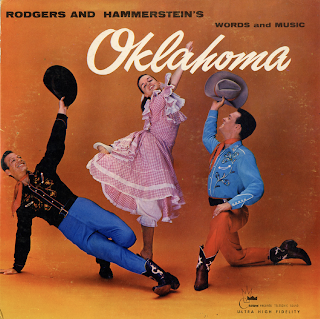 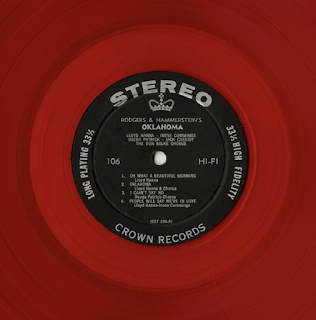 Oklahoma
Rodgers And Hammerstein's
Oklahoma
Words And Music
Lloyd Hann, Irene Cummings, Deed Patrick, James Cassidy and The Don Ralke Chorus
Music by Richard Rodgers
Book and Lyrics by Oscar Hammerstein II
Music Arranged and Conducted  by Thomas M. Davis and Hans Hagan
Cover Photography: Ken Whitmore
Art Direction & Production: Florette Bihari
Crown Records CST 106
1958
From the back cover: Lloyd Hanna, who sings Curley here, was a naval pilot in World War II and after returning graduated from UCLA. Having won the Atwater Kent Auditions in 1951 he went to Italy to study singing. His Italian debut was at the Teatro Nuovo in Milan in La Traviata. La Beheme and Pagliacci followed by Madame butterfly in Rome. He was the guest artist at the Milan World Fair singing Opera and Concerts ending with three performances at the Opera House in Venice. Recently he's been heard in La Boheme, Marriage of Figaro and Cinderella, as well as appearances in the famous Hollywood Bowl.
Irene Cummings makes her recording debut as Lurie in this version of Oklahoma... and has Elixa in "My Fair Lady" for CROWN RECORDS. A native of California her most recent triumph were as Museta in "La Boheme" with the Charles Wagner Opera Company, Gilda in "Rigoletto", Hanzel and Gretel under the direction of Carmen Dragon. Concerts with John Charles Thomas, plus many TV and Radio appearances have kept her busy for the past couple of years. Miss Cummings made a successful appearance in the lead of Menotti's "The Telephone" in addition to the title role in "Lucia" and Despina in "Cosi Fan Tutte". Her great talent is most evident in this recording of "Oklahoma".
Oh What A Beautiful Morning
Oklahoma
I Cain't Say No
People Will Say We're In Love
The Surrey With A Fringe On Top
Kansas City
Out Of My Dreams
Finale
Posted by By Mark Betcher at 5:43 PM