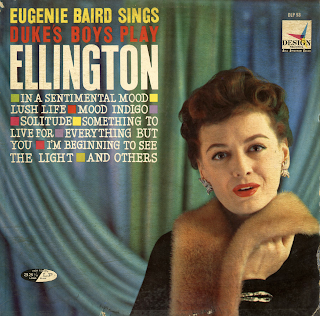 From the back cover: A year before the Pilgrims landed at Plymouth Rock, the family of one of the music world's greatest musicians arrived. Yes, in 1619 the family of Edward Kennedy Ellington arrived at Jamestown, which makes him one of America's "first citizens." Yes, a "first citizen" as a man and as a musician. When Buddy Bolden was renamed King Bolden that was the start of bestowing royal titles on the royalty of jazz. Edward Kennedy Ellington became Duke Ellington in 1916 when he quit jerking sodas at the Poodle Dog Soda Parlor in Washington, D. C. on April 29th, 1899. Went to various schools in the Nation's Capitol and then won an art scholarship at Pratt Institute in Brooklyn, N. Y. But the art Ellington wanted was on a music score and not on a drawing board.

His music is legion. He has composed over 1000 tunes and his records have sold over 25,000,000 copies. The late King George VI was an avid Ellington collector. You can't go to a dance anywhere in the world where the music of our western culture is played without hearing some Ellington classics before the evening is over. "Solitude," "In A Sentimental Mood," "I Let A Song Go Out Of Your Heart" and many other are songs we want to hear, time and time again.

With the above note, we come to Eugenie Baird. Slim, curvaceous and charming, the titian-haired darling Miss Eugenie Baird is one of the truly versatile young singers in show business today. Here is a triple-threat professional who can hold an audience entranced in a theatre, supper-club, radio appearance or on your television set.

Eugenie was born in Pittsburgh, Pa., and followed a show business career without even realizing it. After all, her parents had an extensive theatrical background, so things just came natural. From soloist at her local high school to a brief and very fruitful appearance on local radio Eugenie was in... then followed bands, night clubs around her home area.

Along came Tony Pastor and his Band... Miss Baird left town as his featured vocalist. Then she left the Pastor band to sing on the Bing Crosby Show... then with the Paul Whitman Show... from there to Robert Q. Lewis Show and finally her own network program "Sing It Again."

Her appearances as guest on television have been many and varied... from the Ed Sullivan Show, all around the clock to the Lucky Strike Show.

Many of you have seen her in person at such places as the Paramount Theatre in New York City, The Embassy Club in Washington, D. C., the Hotel Statler in Pittsburgh and The Copa and Glen Rendezvous in New York.

Eugenie's most cherished engagements was the Gershwin Memorial Concert at the Hollywood Bowl.

Many of you turn your radio and television sets on each day and unwittingly hear Eugenie's voice... for she has made hundreds of singing commercials.

The most important thing that is to be said at this point is that Eugenie Baird imparts a certain wonderful feeling to the words and music when she likes what she's doing. Eugenie picked the songs in this album so you're in for a real treat. – Abbot Lutz

I'm Beginning To See The Light
In A Sentimental Mood
Something To Live For
Mood Indigo
Everything But You
I Let A Song Go Out Of Your Heart
Lush Life
Solitude
Pass By Me
Well Well
Posted by By Mark Betcher at 7:31 PM