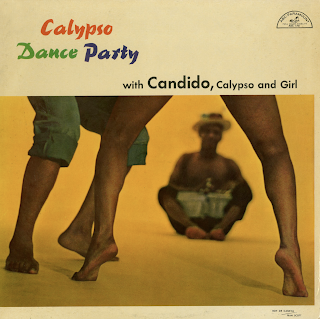 From the back cover: Candido Sings! and perhaps this should have been the title of this album; for this will be a revelation, even to those who have followed closely the career of "the king of the conga drum." Yes, on two of the selections (Talking Drums and Pack Up Your Eye With Sand) the voice you hear is that of Candido himself. The name of the drummer has so long been associated with the finest in Jazz that the fact of his Island background is forgotten. Calypso belongs to Candido and is a part of him, just as much as Cuba is a part of the Caribbean. A Carib drummer must sing!

Candido was born in Havana, Cuba, and as he says: "The sound of drums and the song of birds were the first things I heard..." And except for a brief romance with the bass and guitar, the drums have been his life. He always knew the traditional rhythms of the West Indies, and when he came to the United States to play at the Havana-Madrid, he was hailed as virtuoso by the jazz world. George Shearing, Duke Ellington, Dizzy Gillespie, and the great Charlie Parker... they all welcomed him to the bandstand. He traveled with the greats of jazz from coast to coast and the name Candido became a part of American legend. The artistry of Candido profoundly influenced our music.

The songs of this album were written or adapted by William Attaway, whose name appears on most of the hit Calypsos of the day. The combination of Candido and Attaway is, in our opinion, an event in music of this gendre. We have brought together a top composer and a top artist to produce an album full of exciting-invention. Here is the true scope of West Indian music... ranging from stark dramas to high humor, from simple love to great longing. The standards of Island music will improve as the demand grows, but we do not expect this album to be surpassed.

From Billboard - June 24, 1957: Main distinction here is percussion work by Candido who also sings in "Talking Drums" and "Pack Up Your Eye With Sand." Balance of package emphasizes competence and smoothness rather than animal spirits. Recording is live; cover guaranteed to win attention.

Everybody Loves Saturday Night
The Search
Calypso Tromp
Cordelia Brown
Talking Drums
I Gonna Pack Up Your Eye With Sand
Linstead Market
Buy Sweet Dreams
Murder In The Market
Like My Heart
Bumba Boat
Posted by By Mark Betcher at 5:52 AM