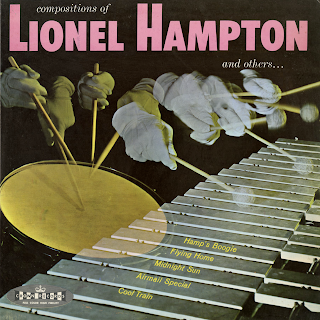 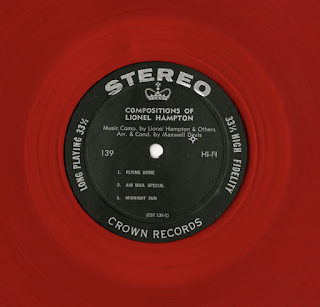 From the back cover: Hamp started as a drummer playing hokey after beats with Louis Armstrong in 1930. From there is the Les Hite Band... and that happy night when John Hammond made Benny Goodman listen to an unknown Kansas City drummer take a chorus on the vibes. He joined the Goodman band and the rest is history.

In the past "Hamp" has had some great bands, but during the way it became almost impossible for him to keep his big band together at the same high standards... but it never suffered from want of enthusiasm.

Of late Hamp (since his bus accident of 1957) has been working a lot in Europe and especially in the new Republic of Israel in which he is vitally interested.

The tunes here are all the great ones that the public recognizes as being that special property of "Hamp's" but of them all let me just relate one true story told to the writer by Hamp. As he and the Benny Goodman band were flying from San Francisco to New York City World's Fair of 1940... Hamp in looking out the window started humming a little melodic riff. He repeated it with variations and then noticed Benny Goodman, sitting next to him, writing down the notes on some music paper. When asked what the name of the tune was, Hamp simply said... "I don't know, I just made it up I'm so glad to be flying home." Need I add that this was the basis for "Flying Home". – Frank Evans