Dudley Caproni At The Dirty Dick's 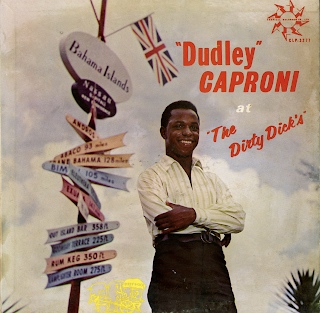 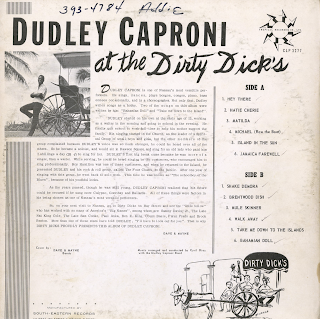 From the back cover: Dudley Caproni is one of Nassau's most versatile performers. He sings, dances, plays bongos, congos, piano, bass, emcees occasionally, and is a choreographer. Not only that, Dudley writes songs as a hobby. Two of the songs on this album were written by him: "Bahamian Doll" and "Take Me Down To The Island".

Dudley started on his own at the early age of 13, working as a waiter in the morning and going to school in the evening. He finally quit school to work full-time to help his mother support the family. His singing started in the Church, as the leader of a Spiritual Group of small boys and girls, but the other members of the group complained because Dudley's voice was so much stronger, he could be heard over all of the others. So he became a soloist, and would sit in Rawson Square and sing for an old lady who paid him 2 shillings a day (28¢) to sing for her. Dudley's first big break came because he was more of a singer, than a waiter. While serving, he could be heard singing by the customers, who encouraged him to sing professionally. Roy Hamilton was one of these customers, and when he returned to the Island, he presented Dudley and his rock & roll group, called The Four Chums, to the public. After one year of singing with this group, he went back to solo work. This time he was known as "The Schoolboy Of The Blues", because of his youthful looks.

As the years passed, though he was still young, Dudley Caproni realized that his future could be secured if he sang more Calypso, Goombay and Ballads. All of these things were factors in his being chosen as one of Nassau's most versatile performers.

So, on your next visit to Nassau, go to Dirty Dicks on Bay Street and see the "little fellow" who has worked with so many of America's "Big Names", among whom are Sammy Davis, Jr., The late Nat King Cole, The late Sam Cooke, Paul Anka, Ben E. King, Clount Basie, Perez Prado and Brook Benton. More than one of these stars have told Dudley, "I'll have to look out for you". That is why Dirty Dicks Proudly Presents This Album Of Dudley Caproni. – Dave & Mayne

Hey There
Hatie Cherie
Matilda
Michael (Row The Boat)
Island In The Sun
Jamaica Farewell
Shake Demora
Brentwood Dish
Mule Skinner
Walk Away
Take Me Down To The Islands
Bahamian Doll
Posted by By Mark Betcher at 5:35 PM