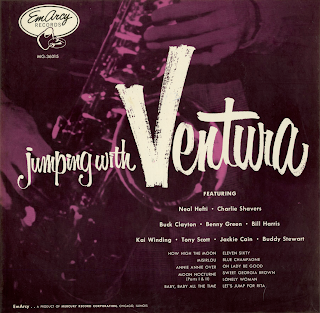 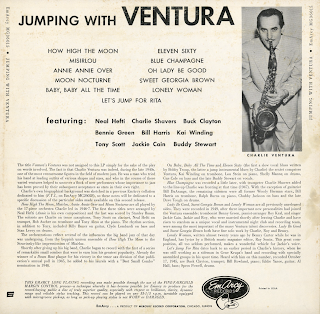 From the back cover: The title Ventura's Ventures was not assigned to this LP simply for the sake of the play on words involved. The fact is that Charlie Ventura was indeed, during the late 1940s, one of the most venturesome figures in the field of modern jazz. He was a man who tried his hand at leading outfits of various shapes and sizes, and who in the course of these varied ventures helped to uncover a flock of new performers whose importance to jazz has been proved by their subsequent acceptance as stars in their own right.

Charlie's own biographical background was sketched in a previous EmArcy collation dedicated to him (F.Y.I., on EmArcy MG26028), so these notes will be dedicated to a specific discussion of the particular sides made available on this second release.

How High The Moon, Misirlou, Annie Annie Over and Moon Nocturne are all played by Neal Hefti (Annie is his own composition) and the last was scored by Stanely Baum. The soloists are Charlie on tenor saxophone, Tony Scott on clarinet, Neal Hefti on trumpet, Bob Ascher on trombone and Tony Aless at the piano. The rhythm section, in addition to Tony, included Billy Bauer on guitar, Clyde Lombardi on bass and Stan Levey on drums.

The orchestrations reflect several of the influences the big band jazz of that day was undergoing, from the boppish unison ensemble of How High The Moon to the Stravinsky-like impression of Misirlou.

Shortly after giving up his big band, Charlie began to record with the first of a series of remarkable small combos that were to earn him his greatest popularity. Already the winner of a Down Beat plaque for his victory in the tenor sax division of that publication's annual poll in 1945, he added to his laurels with a "Best Small Combo" nomination in 1948.

On Baby, Baby All The Time and Eleven Sixty (the first a slow vocal blues written by Bobby Group, the latter a jump instrumental blues by Charlie) the sextet comprises Ventura, Kai Winding on trombone, Lou Stein on piano, Shelly Manne on drums, Gus Cole on bass and the late Buddy Stewart on vocals.

Blue Champagne was recorded a little later, with trumpeter Charlie Shavers added to the line-up Charlie was fronting at that time (1947). With the exception of guitarist Bill DaArange, the remaining sidemen were all former Woody Herman stars: Bill Harris on trombone, Ralph Burns on piano, Chubby Jackson on bass and the late Dave Tough on drums.

Lady Be Good, Sweet Georgia Brown and Lonely Woman are all previously unreleased sides. They were recorded in 1949, after three important new personalities had joined the Ventura ensemble: trombonist Benny Green, pianist-arranger Roy Kral, and singer Jackie Cain. Jackie and Roy, who were married shortly after leaving Charlie and have risen to stardom as a unique vocal and instrumental night club and recording team, were among the most important of the many Ventura talent discoveries. Lady be Good and Sweet Georgia Brown both have fine solo work by Charlie, Roy and Benny.

Lonely Woman, written almost twenty years ago by Benny Carter while he was in England, has lyrics by a British music magazine editor, Ray Sonin. This great composition, all too seldom performed, makes a wonderful vehicle for Jackie's voice.

Let's Jump For Rita dates back to an earlier period in Charlie's history, when he was still working as a sideman in Gene Krupa's band and recording with specially assembled groups in his spare time. Heard with him on this number, recorded October 17, 1945, are Buck Clayton, trumpet; Bill Rowland, piano; Eddie Dance, guitar; Al Hall, bass; Specs Powell, drums.