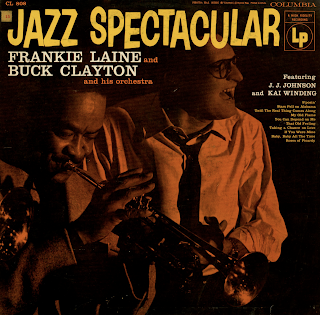 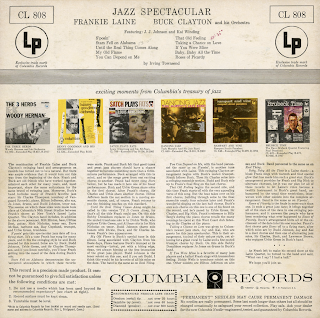 Available from online vendors so I will not be posting a sample presented here to share the cover art and notes excerpt.

From the back cover: The combination of Frankie Laine and Buck Clayton's swinging band and arrangements on records has turned out to be a natural. But there was ample evidence that it would turn out this way from the beginning of the date. Frank and Buck are old friends who have worked together, admired each other for many years, and, most important, share the same enthusiasm for the same brand of swinging jazz. Moreover, Buck's band includes many of Frank's favorite jazz stars: Sir Charles Thompson (courtesy of Vanguard Records), piano, Hilton Jefferson, alto sax, Jo Jones, drums, and Budd Johnson, tenor sax. The session on which these sides were made took place at Columbia's 30th Street Studios between Frank's shows at New York's famed Latin Quarter. The Clayton band includes, in addition to the above personnel, Milt Hinton, bass, Clifton Bests, guitar, Nick Nicholas, tenor sax, Dave McRae, baritone sax, Ray Copeland, trumpet, and Urbie Green, trombone.

From Billboard - February 16, 1956: A sampling of this set, issued on an EP last November, reportedly sold well to both pop and standard jazz customers. Now, severn tasty morsels have been added to the original three – "Baby, Baby All The Time," "Rose Of Picardy" and "Taking A Chance On Love." It's swing-style jazz, comfortable as old shoes, warm and expressive. Laine is in good voice and mood, and he wails thru-out. Clayton's best track is his lyrical "My Old Flame." The Kai and Jay trombone team is a big musical and sales plus on several tracks. Should sell strongly over a broad area.

S'posin'
Stars Fell On Alabama
Until The Real Thing Comes Along
My Old Flame
You Can Depend On Me
That Old Feeling
Taking A Chance On Love
If You Were Mine
Baby, Baby All The Time
Roses Of Picardy
Posted by By Mark Betcher at 5:53 PM