The Big Band's Back In Town - Doc Severinsen 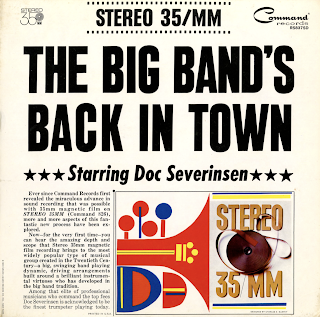 From the cover: Doc Severinsen's first album recorded for Command (Command RS 819) proved to be one of the most outstanding instrumental performances in the history of the recording industry and was acclaimed by leading critics and musicians throughout the world.

In preparing this, his second album, Doc was able to utilize the revolutionary new recording techniques perfected by Command... 35/MM magnetic film recording. His gorgeously rich tone, the daring brilliance and the incomparable cleanses and precision with which he explores the entire range of the trumpet as well as his intense feeling for melody are all the result of intensive early schooling art the hands of his father (a dentist by profession but avocationally a devoted musician), later experience as a star sideman with Charlie Barnet's magnificent band of the later Forties and with Tommy Dorsey's most polished band, plus a decade as the top-ranking trumpet man in New York's studio firmament.

Love For Sale
Flamingo
Blues In The Night
Granada
When Your Lover Has Gone
Johnny One Note
Lonesome Road
My Funny Valentin
St. Louis Blues
The Look Of Love
I Cried For You (Now It's Your Turn To Cry Over Me)
Poor Butterfly
Posted by By Mark Betcher at 4:41 PM