Eileen Fulton Sings With You In Mind 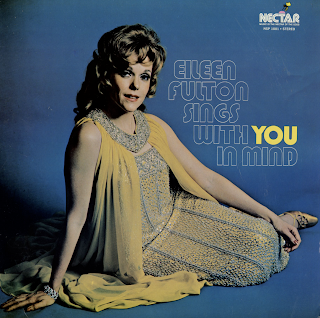 From Billboard - January 24, 1972: Nectar Records has launched a television advertising campaign for "Eileen Fulton Sings With You In Mind," which was released late last year.

Danny Fortunato, Nectar president, who produces, promotes and markets the company's product, said that the Fulton LP is being supported by three TV spots in 12 markets. The commercials are airing on the CBS-TV soap opera "As The World Turns," on which Miss Fulton stars. In addition, Nectar has placed ads in TV fan magazines. Her latest single, "I Wonder Who My Daddy Is," written by Gladys Shelley, was recently released.

The artist's fine single, "Radio," concerns the old-time radio soap operas, and Fortunato believes it is the only record of its kind.

Nectar is also into the nostalgia wave with the "Bring the Boogie Woogie Back," by Toni Mathis. The single recreates the musical background of the 40's, and is "probably the first nostalgic record created with a soul motif," by Fortunato.

Nectar, which has 21 national independent distributors, has two music publishers, Scottie Music (BMI) and Donato Music (ASCAP). The label is aiming for the MOR pop market.

Some Dreams Never Come True
What They're Showing On The Silver Screen
Love Of The Lonely
My Coloring Book
Go Away From My Window
Radio
Lollipops And Roses
What The World Needs Now Is Love
Ashes
Feeling Good
Get Happy
Posted by By Mark Betcher at 3:33 PM