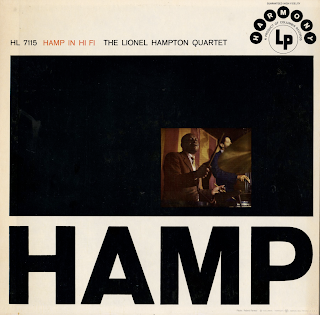 From the back cover: The whole thing started in 1956 when the news got around the Camp was planning to tour the Old World again. This time, however, it had to be completely different. It seemed a good idea, therefore, to try and persuade Camp to record a number of well-known European – folk songs and other similar melodies – accompanied by his rhythm section. Lionel Hampton was immediately taken by the idea of giving free rein to his imagination with some completely new material. However, there was one major handicap to be overcome. Like a number of other "greats" in the world of jazz music – Erroll Garner, for example – he can't read music, so it was impossible to give him the "new" music on paper to allow him to study it and make his choices. A week later – March 30 and 31 to be precise – our Mr. Streefkerf met Hampton during his stay in Brussels and they started to play, one the vibes and the other the piano. Hamp picked out some tunes he liked best, and some head arrangements were thought up at the same time. It all happened on May 1 and 2. Lionel was working in Paris at the time and it was there he recorded the numbers he'd worked on since the original rehearsals in Brussels. These numbers – all of which you've heard before, but never, never like this – have been grouped together under the title Camp in Hi Fi.