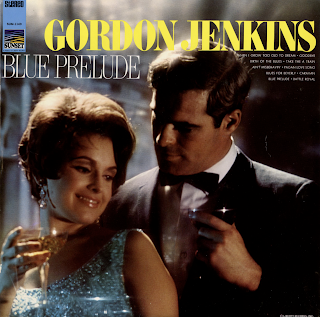 From the back cover: Gordon Jenkins, a product of Webster Groves, MO., gained some early professional experience as banjoist, pianist and later conductor and arranger with various orchestras in St. Louis. Broadway became award of him in 1937, when he scored the music and served as conductor for "The Show Is On." A year later, he was with NBC in California as musical director.

Since then, Jenkins has enjoyed a multiple career. His compositions have ranged from "Manhattan Tower" to "Tzena Tzean"; he has had many TV and film credits, and occasionally he has been teamed with virtuosi from the jazz world, his best-known partnership having having been with Louis Armstrong. Marshall Royal has been a sort of eminence grass of the Count Basie band, which he helped reorganize in 1951. Born in Sapulpa, Oklahoma, he studied violin as well as the reed instruments and was only 13 when he made his professional debut. During the 1930s, he worked in California, chiefly with the Les Hits orchestra, which for a while served as Armstrong's backdrop. When Lionel Hampton left Benny Goodman to form a band in 1940, Marshall was a key man with Camp' unit for two years. During the 40s he played with Jack McVea, Eddie Haywood and many studio groups around Hollywood.

Because he has been best known for his section work with Basie and is rarely given a chance to exhibit his solo ability, Marshall Royal's work here will come as a surprise to less observant followers of the Basie phenomenon. Fortunately, like many musicians who had studied the band closely Gordon Jenkins has long been aware of Royal's gifts as a subtly melodic improvising musician. His style most closely evokes the work of another great alto man who rose to prominence in the 1930s. Benny Carter, and at times there are traces of Johnny Hodges. What emerges most strikingly from these sides, though, is not the impression of any influence but the sweeping impact of Royal's own fluency and inspiration and the remarkable degree to which Jenkins, by giving him this sumptuous showcase, has drawn out his full personality to an extent the Basie setting can never make possible.

Pagan Love Song
When I Grow Too Old To Dream
Ain't Misbehavin'
Caravan
Birth Of The Blues
Blues For Beverly
Battle Royal
Goodbye
Blue Prelude
Take The "A" Train
Posted by By Mark Betcher at 11:58 AM