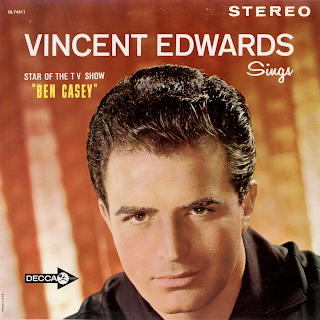 From the back cover: Vincent Edwards is the rugged star of the popular television series, "Ben Casey," which depicts with authenticity and rare insight the personal and professional problems of doctors in a modern urban hospital, and which centers around a dedicated and idealistic young neurosurgeon. Born in Brooklyn, New York, Vince attended Ohio State University and The University Of Hawaii. He entered show business via New York's famous American Academy – his classmates included Grace Kelly, Anne Bancroft and John Cassavetes. No newcomers to television – his credits include memorable performances on "The Untouchables," G. E. Theater," and "Alfred Hitchcock Presents." His movie credits include "Serenade," "The Three Faces Of Eve," "The Night Holds Terror," "City Of Fear," Murder By Contact," and "The Killing."

From Billboard - July 16, 1962: The TV heart-throb, Vince Edwards, otherwise known as Dr. Ben Casey, shows off a warm singing style on this collection of romantic ballads. Although his singing style is merely adequate, his TV popularity particularly with the fems, is strong enough to make this album a solid seller. He does acceptable jobs on "I'll Walk Alone," "When I Fall In Love," "Lonesome Road" And "Unchained Melody." The ork backings are smooth and lush.

I'll Walk Alone
Don't Worry 'Bout Me
When I Fall In Love
I Got It Bad
Try A Little Tenderness
How Deep Is The Ocean
Lonesome Road
Stormy Weather
As Time Goes By
An Now
Unchained Melody
Everybody Got A Home But Me
Posted by By Mark Betcher at 7:22 AM