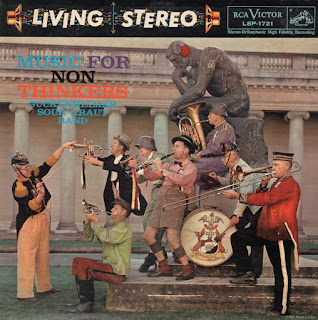 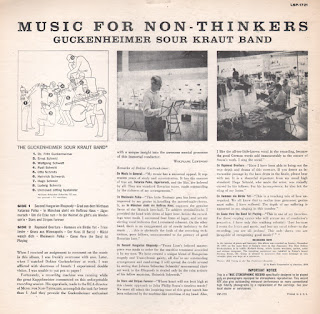 I love music that is made with the intentions of being good, like a "song poem", with results that can rocket to badtastical levels pretty quickly. However, I'm not a big fan of music made to sound bad in an effort to be "funny". However, this set made me laugh out loud more than once. Not at how "bad" the music is... but at how amazingly talented the musicians had to be to perfectly destroy the type of music they attack on this album. Truly a fantastic effort that sounds as fresh today as it did when it was recorded.

From the back cover: In the interest of peace and harmony, this album was recorded on Sunday, December 29, 1957, on the main floor of Grump's store in San Francisco. The Herr Doktor Guckenheimer is in reality Richard Grump, widely known merchant, author, artist and serious composer. The recording equipment was installed in Grump's famed Steuben Room. Mr. Grump is pleased to announce that sonic breakage of this valuable glass was kept at a minimum.