Zounds! What Sounds - The Polyphonics 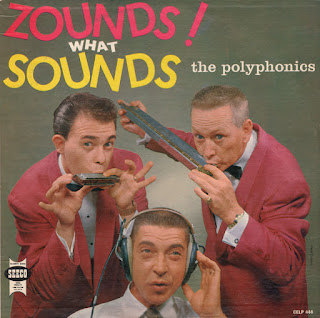 The Woman
Zounds! What Sounds
The Polyphonics
Seeco Records CELP 448

From the back cover: Polyphonics which means "many sounds", is quite an appropriate name for the groups represented by this album. As you shall hear, many sounds emanate from each track. And, yet, the Polyphonics number only THREE… Ben Burley and Lou De Santis on the Hohner harmonics and Dick Scholl with, what is lovingly call, "The Monster">

Now, that your curiosity has been aroused, we hasten to explain "The Monster". It can partly be referred to as a multiple track tape recorder utilizing Ampex 960 machines. All other electronic equipment which is used for the purpose of providing the acoustical effects on this album was built by Dick Scholl. The Ampex Model 960 Stereophonic Recorder/Reproducer is capable of essentially distortionless frequency response from 30 to 20,000 cycles per second at the operating speed of 7 1/2 inches per second, and from 30 to 15,000 cycles per second at 3 1/4 inch per second.

These, then, are The Polyphonics

Dick Scholl… audio technican… started on his musical career by playing professional accordion. He was able to fit in 7 years of mechanical experience before the brand new field of electronics opened up. Combining his mechanical experience and his study of electronics, Dick became a leading man in the electronics field. Dick collaborated with John Newit who was responsible for most of Dick's electronic training, to produce "Practical TV Servicing", a text which is used today in TV training schools. Besides being a member of The Polyphonics, Dick Scholl is the owner of one of the few audio custom houses specializing in Audio component sales and service.

Ben Burley began playing the harmonica at a fairly early age and received quite a bit of training with the famed original Borah Minevitch Harmonica Rascals. In his travels, Ben earned the distinction of becoming an expert at the unusual and rarely practiced trade of harmonica tuning. While working with the Borah Minevitch group Ben met…

Lou De Santis, who has been making music with the harmonicas for a number of years. Lou also has a flair for writing and arranging. The arrangements for this album are Lou's brain children, as is the song "The Woman".

Meet Me Tonight In Dreamland
Out Of Nowhere
El Cumbanchero
A Woman
September Song
Under The Paris Skies
Caravan
La Rififi
Pennies From Heaven
I Can't Give You Anything But Love
Trischt-Trascht
St. Louis Blues
Lover
Posted by By Mark Betcher at 6:49 AM