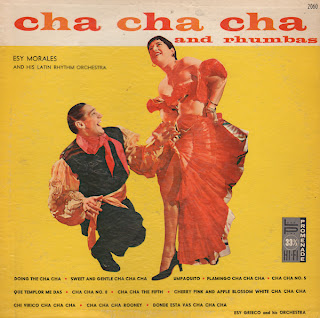 There is more info on the back of this album that can be currently found on Morales wiki page:

At the age of eight, Esy was already adept at the saxophone, clarinet, and flute. Papa Morales, a hard-working tailor moved his wife and nine children to Venezuela. One by one, the kiddies joined their Uncle Augusto Sanabia's concert orchestra. Word reached the Venezuelan President's ear of the family's unusual musical talent. As a result, the Morales were soon playing in the Chief Executive's palace and living there in undreamed or luxury.

Esy came to the U.S. at the age of 20 and engaged in concert work. He attracted the attention of Xavier Cugat, Esy did considerable movie work and arranging, at the same time building a reputation as one of the world's foremost flute virtuosos.

He left Cugat in '43 to help his brother, Noro, launch his band. Three years later, Esy decided to wield a baton himself. The big break came early one summer when Esy's band was invited to play the July 4th weekend at a prominent resort in the New York Catskills. The exciting rhythm of Morales orchestra proved such a crowd pleaser that the band was held over the rest of the summer.

A real showman, Esy enjoyed much success in television, particularly on his own CBS show. He was featured in a Universal motion picture with Burt Lancaster, Criss Cross, and was a big favorite of college prom-goers.

On this recording, Uncle Augusto appears along with brother, Pepito, who is featured on the baritone sax. Brother Noro claims Humberto in his band, while two of the sisters are famed as concert pianist and violinist in their native Puerto Rico.

According to his wiki page, Morales died at the age of 34 from a drug-induced heart attack.
Posted by By Mark Betcher at 8:23 PM