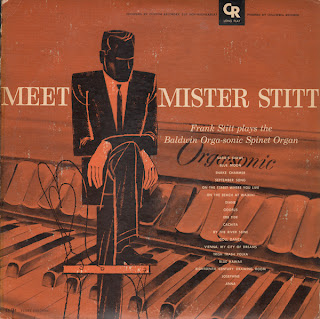 From the back cover: Born in San Bernardino, California, Frank Stitt played the organ commercially in the Chicago area for several years after World War II. In the last six years he has traveled extensively, particularly in the west coast states, playing the Baldwin and Orga-sonic Organs on radio and television plus numerous personal appearances.

The Orga-sonic Spinet Organ, which Mr. Stitt plays for this recording, was designed by and is currently built by the Organ Division of The Baldwin Piano Company, Cincinnati, Ohio.
Posted by By Mark Betcher at 4:26 AM