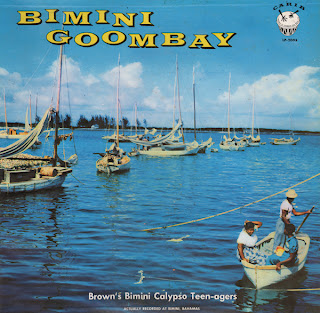 From the back cover: Two of the boys, Neville and Frank Brown, who are still in their 'teens, are sons of Captain Harcourt Brown, the genial host to all visiting yachtsmen. Captain Brown, in the not too long-ago when Bimini was comparatively unknown, often entertained his guests with the folk tunes that are included in this album. He now leaves this pleasant task to his two talented sons and the musical group they have assembled, including Wilmore Ritchie, vocalist, and "Nattie" Saunders, the island's only steel banjo player.
Posted by By Mark Betcher at 6:24 PM