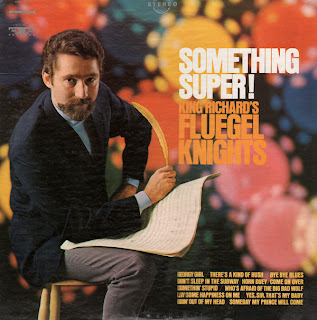 Apparently King Richard is Dick Behrke as credited on the back cover as Musical Director. Behrke played in Bobby Darin's first band in the early 50s. He later became a conductor/arranger for Darin. He continued writing music for commercials and movies, including Beyond The Sea (2004), a "swooning study of "Mack The Knife" singer Bobby Darin (Kevin Spacey)."

This is an outstanding bright and groovy space age brass album.

Who's Afraid Of The Big Bad Wolf
Horn Duey
Georgy Girl
Come On Over
There's A Kind Of Hush
Lay Some Happiness On Me
Goin' Outta My Head
Some Day My Prince Will Come
Yes Sir That By Baby
Don't Sleep In The Subway
Bye, Bye Blues
Posted by By Mark Betcher at 4:38 PM