The Untouchable Sound Of The Bill Black Combo 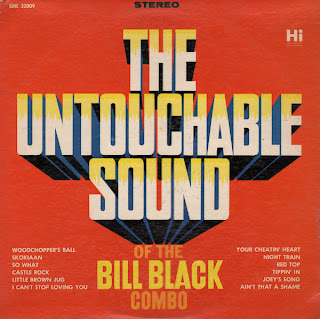 Early 60s (1962?) no frills rock combo. The Bill Black Combo, opened for The Beatles (at their request) in 1964 on their historical 13-city tour of America. Black was able to do the Ed Sullivan Show, but could mot make the tour do to ill health. He died on October 21, 1965 during a third operation to remove a brain tumor.

Black's widow sold the rights to use the Bill Black Combo name and the band changed to country when they joined Columbia Records.

Read more about Black on his Wiki page. The album is available on CD as a combo package with Bill Black's Record Hop. But the asking price is pretty stiff. You may be able to find some tunes on other CD packages. 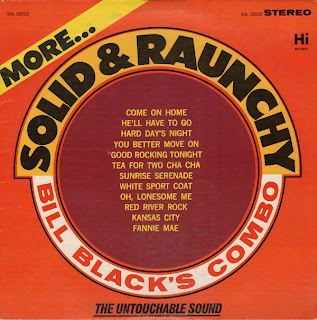 This record has the same vibe as the 1964 Untouchable release above even though it was released the year Black passed away. I can't tell you when it was recorded or how much Black had to do with it.

Both records are very much fun in a "budget" early rock/space age/stripper club hybrid sort of way. The sound is curious and unique to my ears. The first track on the B side titled Come On Home has backing vocals that sound almost like Black hired The Chipmunks to help out. It's not that bad... but it makes you take notice. It's just one of the many quirks that sets these albums apart from the pack.

This one is also available on CD.
Posted by By Mark Betcher at 4:18 AM