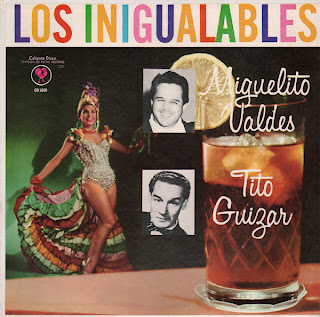 There are Spanish/English note on the back cover of this import(?).

Miguelito Valdes is one of the greatest singers of Afro Cuban music. He is making his debut with Caliente Records in this LONG PLAYING ALBUM. This great singer began his career several years ago as a vocalist with the well known orchestra CASINO DE LA PLAYA. He appeared in a festival given by the famous orchestra leader Xavier Cugat in Hollywood a few years ago. Miguelito Valdes was also accompanied by the Noro Morales Orchestra and one of the greatest Cuban groups, the famous Sonora Matancera.

Tito Guizar, the lovable troubador of Mexico, brings you the best of his reperatory in the Long Playing Album, by Caliente Records. This great Mexican Singer has made many appearances in most of the important night clubs of Latin America and the United States, and many Spanish and American motion pictures.

The music is a curious mix of styles. Guizar's side is more "folk" and almost sounds like the tracks were lifted from a sound track. So I've picked Babalu, a Valdes track for the sample.
Posted by By Mark Betcher at 3:18 PM