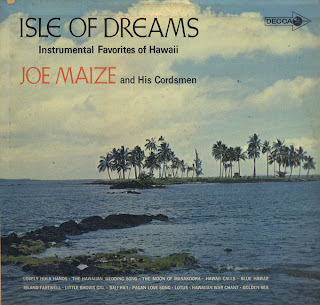 This is an obscure artist/album featuring pleasant Hawaiian steel guitar music with touches of space age vibes along with the accordion. There are a number of exotica favorites on the record including Bali H'ai, Pagan Love Song, Hawaiian War Chant and The Moon Of Manakoora. There is also a terrific "oriental" number titled Lotus on this record. The sound of the recording is split between these "exotic" numbers and more "folk" sounding tunes. The album is a surprise addition to my "exotica" collection.

From the back cover: His (Maize) partner, Marty O'Conion, does the distinctive musical arranging.

The only real info on Maize comes from spaceagepop.com:

Will Louviere described Joe Maize and his Cordsmen as a "cross between the Three Suns and the Three Stooges," and that about sums it up. Maize was a versatile console steel guitar player, ala Alvino Rey, and like Rey, he unashamedly used his instrument for melody, percussion, and sound effects. The group performed in night clubs ranging from the Boulevard in New York City to the Mocambo in Hollywood, with an occasional gig at one of the hotels on Waikiki, but most of the time they were based in Las Vegas and Reno. The spirit of their act was not unlike that of the better-known Mary Kaye Trio, which played some of the same venues, such as the Painted Room of the Desert Inn: moving back and forth between instrumentals, vocals, and comic skits and often combining all three.

Presenting Joe Maize and his Cordsmen is a classic Space Age Pop album, complete with the obligatory standards such as "Misirlou"and "The Third Man Theme", lots of string wizardry by Joe, and nice jazzy accordion work, always a favorite of mine.
Posted by By Mark Betcher at 9:31 AM