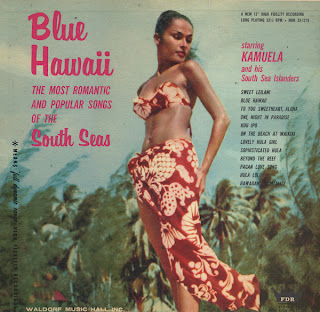 Beyond The Reef
Blue Hawaii
Kamuela And His South Sea Islanders
The Most Romantic And Popular Songs Of The South Seas
FDR Waldorf Music Hall, Inc. MHK 33-1219

Obscure budget album. From the back cover: Kamuela and his South Sea Islanders feature the usual instrumentation of Hawaiian orchestras: two steel guitars, a Spanish guitar, ukulele, bass, drums, with a flute doubling on clarinet. Kamuela, who plays all the glissading solos on his steel guitar, was born in Honolulu, where he worked in the famous Royal Hawaiian Hotel, and who, since arriving in the United States, has been featured in such noted Hawaiian orchestras as those of Lani McIntyre and Ray Kinny.
Posted by By Mark Betcher at 11:44 PM