The Exciting Sound Of Acquaviva And His Orchestra 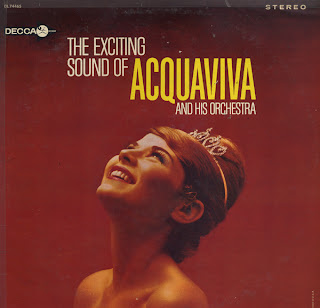 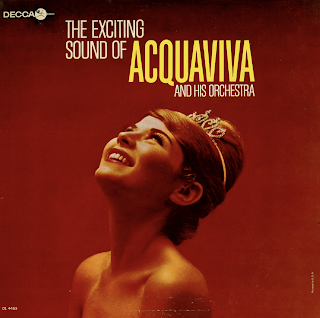 From the back cover: Acquaviva does have a first name, by the way (his parents christened him Anthony, back in Beacon, New York). He wasted no time showing his natural bent or music, starting at the tender age of four. The clarinet was his first love. Even in his early training he looked to broader horizons – horizons that would see him study conducting under such masters as Albert Stoessel and the great Serge Koussevitzky at Tranglewood in the Berkshires.

When the war was over, he quietly formed his own band and toured with a small jazz group. Over the years he has steadily built an almost legendary reputation for musical versatility as conductor of the famed Symphony of the Air orchestra in concert at Carnegie Hall, and as organizer and conductor of the famed New York "Pops" Symphony Orchestra.
Intermission
Green Valley
Open Your Eyes
Hills Of Rome
Dancing Notes
Autumn Again
Yesterday's Love
A New Shade Of Blue
One Look At You
I Found A Rainbow
A Fool Was I
C'est La Vie
After A Dream
Posted by By Mark Betcher at 9:32 PM