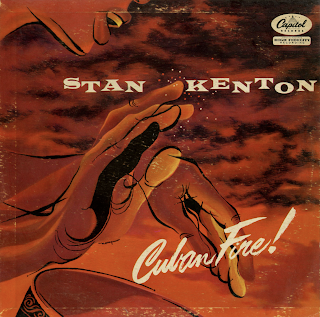 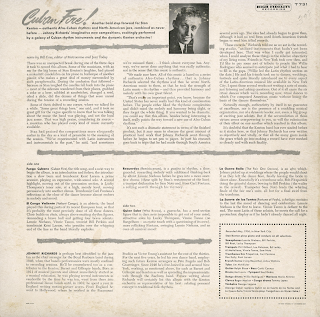 From the back cover: Johnny Richards is perhaps best identified to the jazz fan as the chief arranger for the Boyd Raeburn band during 1946, when that band's performance were mostly confined to recording sessions. He'll be remembered too as a contributor to the Kenton, Barnet and Gillespie bands. Born in 1911 of musical parents and almost immediately started on a musical education, he was playing several instruments in vaudeville by the time he was ten, went from there into professional dance bands until, in 1932, he spent a year in England writing motion-picture scores. From England he went to Hollywood, where he worked in the Paramount Studios as Victor Young's assistant for the rest of the thirties. For the next five years, he led his own dance band, employing such future Kenton arrangers as Pete Rugolo and Bob Graettinger. Since 1946 he's free-lanced in and around New York, working, as mentioned above, for such as Barnet and Gillespie and Kenton as well as spreading the impressionistic web though the Raeburn band. Future writing about Richards will certainly list this album with the Kenton Orchestra as representative of his best: relating personal concept to traditional folk rhythms.

From Billboard - September 1, 1956: Johnny Richards was composer-arranger of the six selections that make up this LP and deserves unstinting praise for this fascination wedding of Afro-Cuban sounds and poly-rhythms in progressive jazz. The Kenton aggregation has seldom sounded more dynamic or more purposefully virtuosic. Each composition brings out different talents of the work: "Congo Valiente" is a study in sonorities, with choir building on choir to a magnificent climax; "Recuerdos" is graceful, sinuous, a bit exotic; "La Suerte de los Tontos" sustains to the last the mood of dancing and celebration. The variety and vitality of this LP ought to make it one of this fall's best-sellers.