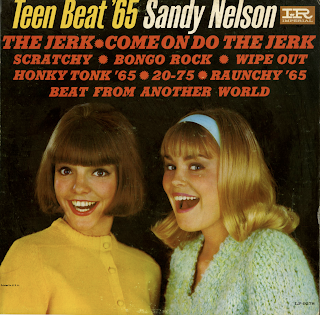 From the back cover: High spot of the album is Sandy's production number called "Beat From Another World." Sandy spent over three weeks recording this original composition, and the results are wild, weird – and fun.

Sandy works out most of his ideas and arrangements in his own sound laboratory, located in his garage, a place which looks absolutely nothing like a garage, because it's stocked to the rafters with the finest recording equipment available.

He also does a nightly FM disc jockey show (for KYYM in Los Angeles) right from home. His show is called "Oldies But Goodies By Remote Control From Magic Mountain Laboratory" and is otherwise known as music with the monster touch.